14/10/20 – On Course for Olympic Qualification, Sailor Ryan Lo Returns to Europe to Train and Compete

Gdansk, Poland, Wednesday, 14 October 2020 – Singapore sailor Ryan Lo finished overall 21st position out of 126 sailors at the 2020 Laser Senior European Championships & Open European Trophy. Lo, 23, returned to his Croatian training base at the end of August 2020 to resume his 2021 Olympic campaign. He had a 4-week training stint with other world-class Laser sailors like Pavlos Kontides, 2012 Olympic Gold Medallist and 2017 and 2018 Laser World Champion, and Tonci Stipanovic, 2016 Olympic Silver Medallist before travelling to Poland to compete in the European Championships. The travel was made possible with the support from the Ministry of Culture, Community and Youth (MCCY), Singapore Sports Institute (SSI) under Sport Singapore (SportSG) and approvals from the Government of Croatia. 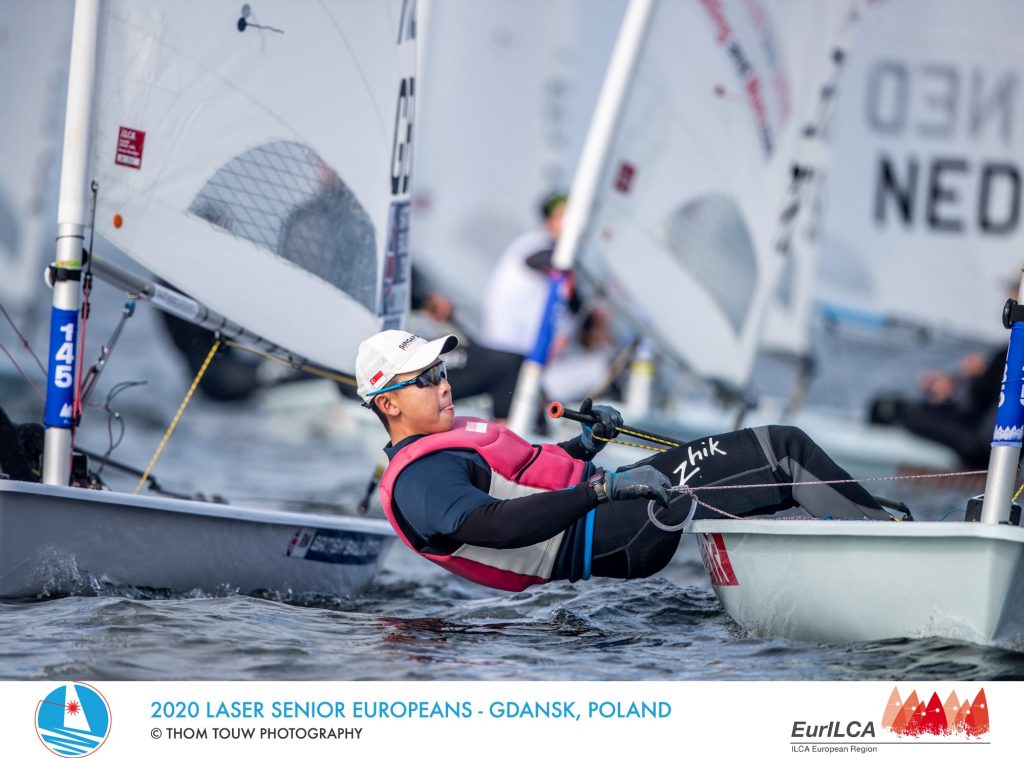 Ryan started strongly during the qualifying round of 5 races in moderate to strong conditions, before having a shaky start in the final series and then finishing off consistently in the last 2 days of the event. This is the first time he has shown that he is competitive against the big boys of the most competitive class in the Olympic fleet, an achievement to affirm that his work ethic and dedication to the campaign is on the right track. The event was won by Elliot Hanson, Britain’s representative for the upcoming Tokyo Olympics. Stipanovic finished 9th and Kontides finished in 16th place.

The 23-year-old SpexScholar is not letting his sights off earning another Olympic berth for Singapore at the upcoming Tokyo Olympic Games for the sport of Sailing in the Men’s Laser Standard Class. Lo was training in Split, Croatia after the 2019 Southeast Asian (SEA) Games to prepare for the Asian Olympic Qualifier scheduled in March. However, due to the escalation of the COVID-19 pandemic, he had to stop his training and return to Singapore.

The 2020 Asian Sailing Federation (ASAF) Asian Championships was scheduled to be held in Abu Dhabi, United Arab Emirates from 15 – 22 March 2020. The organising authority made the decision to postpone the championships until further notice as a precautionary measure due to COVID-19. The event is a Tokyo 2020 Continental Olympic Qualification Event for the Laser, Laser Radial, 49er and Women’s RS:X class events.

Said Lo, “I would like to thank SSI, MCCY and SSF for facilitating my travel back to Europe and making it possible to train and compete with other top international sailors. It is nice to be able to return to training and compete overseas again. This event also helped me gauge how my training the past few months in Singapore had fared against the other sailors around the world.”

Lo added, “Training has been going well so far with an intensive one-month training camp in Split, Croatia with my coach before this European Championships. We will be heading back to Split after this event and continue training there for the winter, with the possibility of heading to Malta later in the year for a training competition, depending on how the virus situation develops.”

Stanley Chan, Deputy President of the Singapore Sailing Federation (SSF) and Chairman of the Olympic Pathway Taskforce (OPT) commended Ryan for his strong performance at the European Championship.

Said Chan, “Ryan’s results are a reflection of his dedication to the hours of training required to be at this competitive level among world-class sailors. He adapted quickly to continue training independently in our local waters despite disruptions brought on by the pandemic and emerged after almost six months with his best ever international result against a strong fleet. I hope this serves as an inspiration to the other sailors and athletes in Singapore to forge on despite our current challenges.”

Chan also added that “the team of scientists behind Ryan and his coach also deserves credit for this performance. We will continue to work hard and ensure that our high performance strategies continue to keep our sailors competitive on the world stage.”

Despite the uncertainty of the pandemic, the sailing community have started to see the resumption of international events with guidelines provided by World Sailing, with the support from the World Health Organization (WHO) and International Olympic Committee (IOC) as well as from the various governments of the event organising authorities. Based on a study conducted by the Italian Sports Ministry and the Italian Olympic Committee, Sailing is one of the sports that offer almost no possibility of spreading the infection. SingaporeSailing is also currently working closely with the various authorities to safely bring back events in the local sailing calendar.