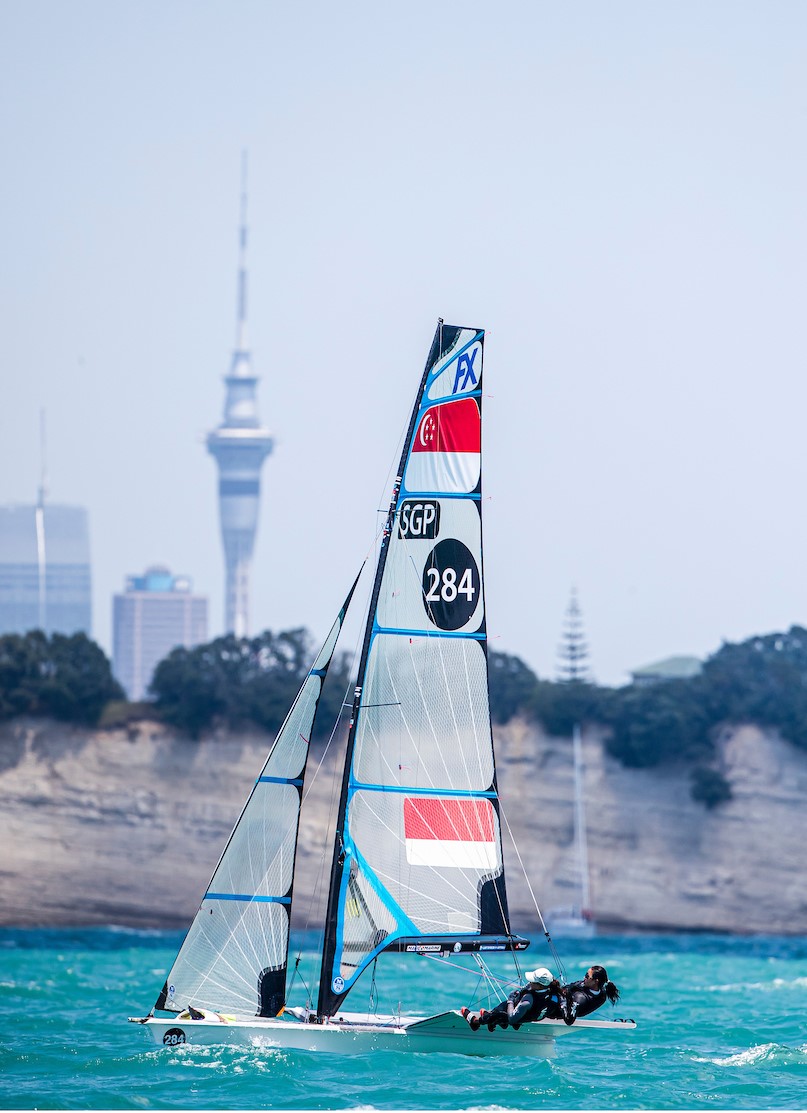 Kimberly Lim and Cecilia Low at the 2019 Worlds held at the Royal Akarana Yacht Club on the shores of the Waitemata in Auckland, New Zealand (Photo: Sailing Energy)

Auckland, New Zealand, Sunday, 8 December 2019 – Singapore’s 49erFX pair of 23-year-old Kimberly Lim and 28-year-old Cecilia Low finished overall 15th position at the 2019 Hyundai 49er, 49erFX and Nacra17 World Championship and earned the republic a spot at the Summer Olympic Games, which will be held in Tokyo, Japan from 24 July – 9 August 2020.

According to World Sailing’s Olympic Qualification System, 6 qualification places were up for grabs at this year’s world championships in Auckland, New Zealand. The top 6 nations at the event that has yet to qualify from the 2018 Hempel Sailing World Championships will get the precious Olympic berth at the 2020 Olympic Games.

After a strong start, Kimberly and Cecilia were in the top 3 positions after day 2 of the event. They comfortably entered the Gold fleet by the end of the qualification phase, and eventually finished 15 out of 61 boats. In total there were 18 nations vying for the qualification berths and the pair’s finishing position placed Singapore as the 6th nation to take the last available slot for this round.

Another pair of Singaporean racing in the 49erFX is the team of Griselda Khng and Olivia Chen. Griselda sustained an injury during the middle of the regatta and the pair were forced to sit out for the remaining of the regatta.

At the same championship, the pair of Justin Liu and Denise Tan were racing in the mixed multihull Nacra 17 where 5 Olympic berths were up for grabs. They finished 37 out of 52 teams placing Singapore as the 11th nation. Their next opportunity to qualify the nation is at the 2020 Asian Nacra 17 Championships in March. 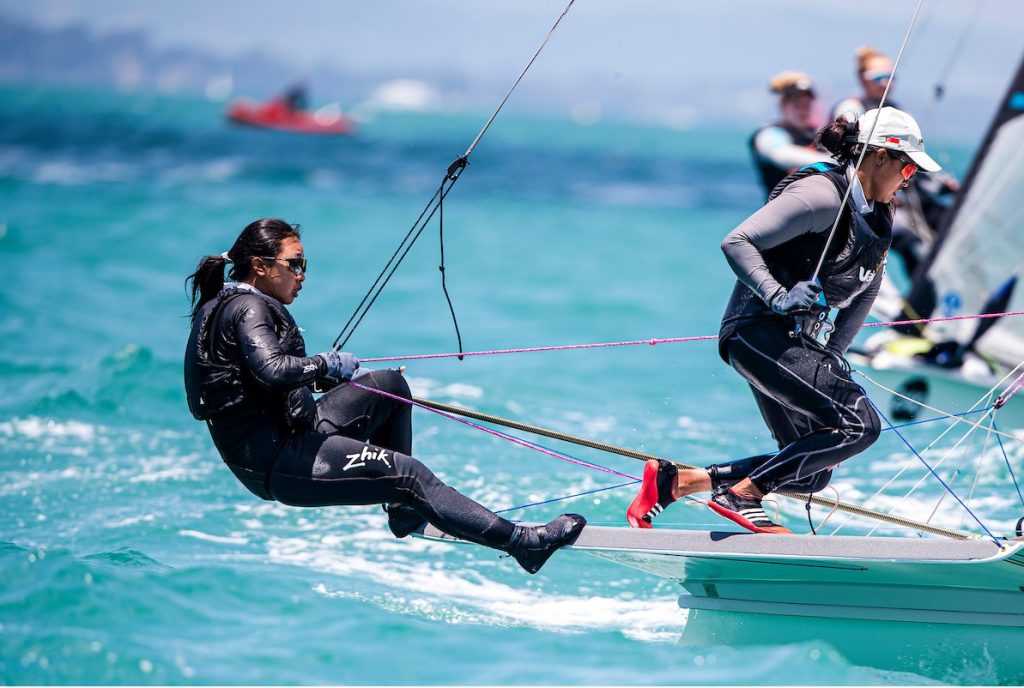 The 49erFX is the progressive class of the Olympic-class 49er; It consists of a 49er hull, wings, and foils, with a scaled-down rig designed to suit the weight of an elite female crew. The 49er was first introduced in the Sydney 2000 Summer Olympic Games with the 49erFX’s debut in the Rio 2016 Summer Olympic Games. The 49erFX was developed by Mackay Boats to be a women’s Olympic class.

49erFX coach Fernando Kuo provided his take on the event, saying “The girls have prepared themselves the best they could for this event, considering it was an Olympic Qualifier (OQ), it was expected for all the teams to show up at their best.”

“Therefore, the races were super tight, and the competition was high regardless of the wind/sea conditions. Tough week for the girls here in Auckland, but they did great, wearing the red jersey (3rd overall) throughout the whole qualifying series and showed every other competitor what they came here for, to qualify Singapore for Tokyo2020 and they did it!”

“I couldn’t be happier and prouder of the team. We cannot forget how hard is to qualify for the OG with this new qualification format and how great this achievement is. To all the other teams yet to qualify, I wish them fair winds and all the best.”

“It was a great showing for us, sitting amongst the leaders for a few days! Pushing hard even when the odds seemed to be against us and finally coming through with our goal,” said Kimberly Lim and Cecilia Low. “We feel ecstatic to have achieved our goal in this event and how our journey of campaigning for the OG has unfolded.”

With the 49erFX duo assured a spot at the 2020 Summer Olympic Games, the team will head to the next World Championship in February 2020 at Geelong, Australia. “Right now, we will still continue to race in as many events as possible to sharpen our racing tactics and also, eventually selecting our equipment for the Games in Tokyo!”

Sailing has traditionally seen good results at the international level with Singapore bagging 50% of Team Singapore’s gold medals at the Asian Games since 1994. At the YOG, sailing won bronze at the inaugural games in Singapore in the Techno 293 windsurfing class and bagging a double-gold result in the Byte Cll class at Nanjing in 2014. Sailing also sent 10 out of Team Singapore’s 24 athletes to the 2016 Rio Olympic Games.

In addition to the Women’s Skiff – 49erFX, SingaporeSailing will be eyeing for more Olympic spots at the next continental qualifiers in the Men’s Laser Standard, Mixed Multihull – Nacra 17, Women’s Laser Radial and Women’s Two Person Dinghy – 470 events.