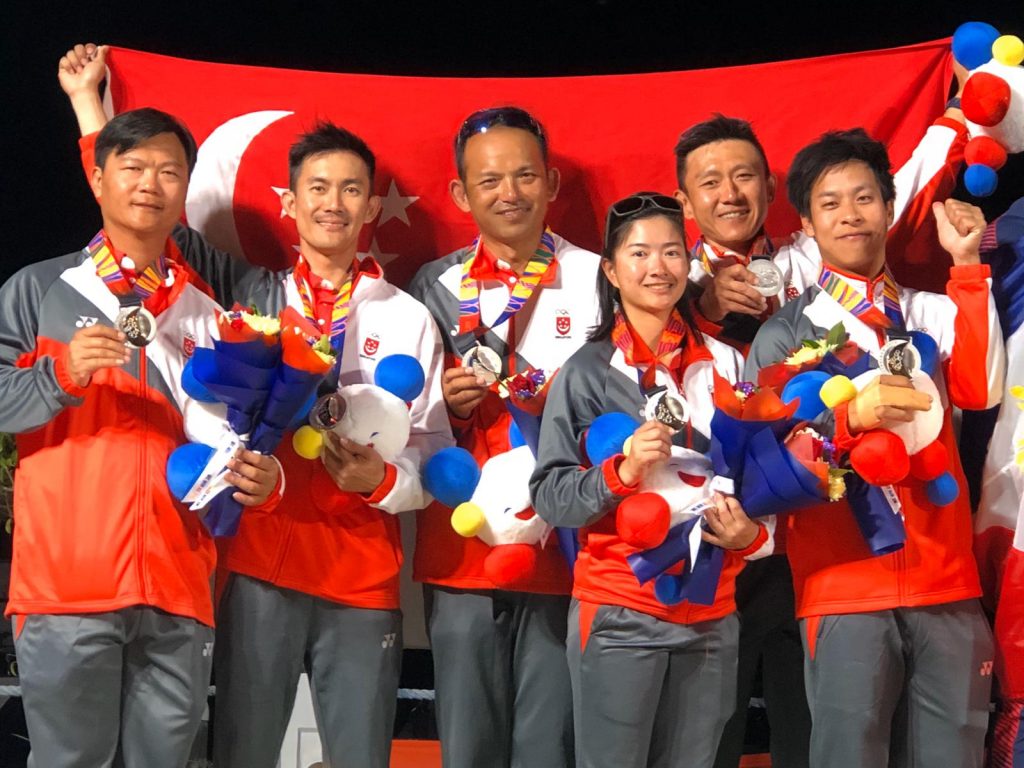 Subic Bay, Philippines, 9 December 2019 – The Singapore keelboat sailors have added another two silver medals to the Republic’s overall tally at the end of the sailing competition at the Subic Bay Yacht Club in the Philippines. They finished second to the host nation in both the fleet racing and the match racing events. This is on top of the 1 gold and 3 silver medals that the Singapore Sailing Team have attained from other events that concluded two days ago.

The mixed keelboat team of 6 sailors come from 3 generations of sailors. Anthony Kiong, Stanley Chan and Colin Ng have been racing for Singapore since the 1997 SEA Games. They took some years off sailing to focus on their careers and in recent years, dusted off their sailing gloves and returned to the sailing racing scene. Joined by Xu Yuanzhen and Roy Tay who dominated the double-handed dinghy events at the 2005 and 2007 SEA Games. Yuanzhen also represented Singapore at the 2008 Olympic Games.

Daniella Ng is the youngest member of the team, not just the only girl in the Singapore keelboat team, but the only girl racing in the keelboat event. She represented Singapore as a junior during the 2007 SEA Games and again in 2015 where she won the Women’s keelboat events. Between them, this team of sailors has 22 SEA Games medals and 5 Asian Games medals under their life jackets.

In the fleet racing event where all 4 teams race together on the course, 8 races were held over 3 days. The team won one race, finished 3rd in another and scored 2nd for the other six races to finish in the Silver medal position behind Philippines team who won all except one race. The Thailand team took the Bronze medal.

For the match racing event, teams sailed one on one in a round-robin stage, followed by knock-out stages of semi-finals (first to 2 wins) and finals (first to 3 wins). The Singapore team met the Thailand team at the semi-final and won the stage with two straight wins. For the finals, the team met the home ground favourites Philippines team. Despite winning all the pre-starts and battles to the first top mark, the more polished crew work of the host team allowed them to pull away into the lead for every match. The Philippines team won the event with 3 straight matches, with the Singaporeans settling for silver. Thailand team won Malaysia team in the petite finals and secured the bronze medal.

Over at the windsurfing course, Singapore was represented by Marsha Shahrin in the Women’s RS:X event and Alexander Lim in the RS:One event. Marsha had a strong start to the regatta and led the fleet of 5 windsurfers for the first two days. When winds picked up on the third and fourth day, the more experienced caught up with her and she settled for 4th after twelve races.

Alexander, 17, was racing against older and more experienced men in his class. Despite exhausting his energy around the racecourse, he finished 4th or 5th in most races. He managed to squeeze in a 2nd spot for the last race to end off the regatta on a more positive note. His overall position is 5th out of 6 windsurfers.

This wraps up the 30th SEA Games with a medal haul of 1 gold and 5 silver medals for the Singapore Sailing Team.